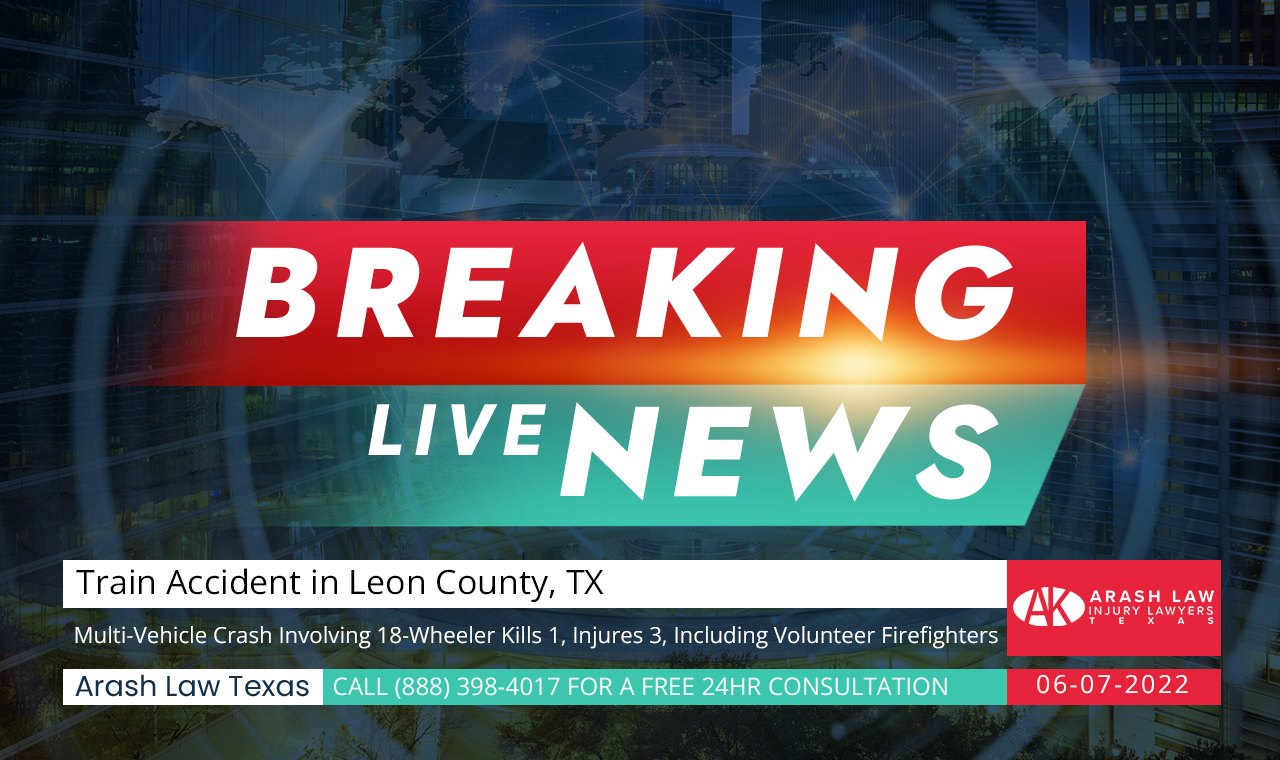 According to the officials, a fatal multi-vehicle highway crash involving an 18-wheeler has left one dead and three hospitalized Tuesday, June 7, 2022.

The fatal collision occurred at around 3:20 p.m. on Interstate Highway 45 at the 157-mile post.

According to the Texas Department of Public Safety, two drivers had stopped on the improved northbound shoulder on Interstate Highway 45 due to a minor crash.

A Toyota passenger car from 2021 and a Chevrolet pickup truck from 2021 were involved.

A 2016 International 18-wheeler traveling northbound approached the crash, colliding with both vehicles, with emergency personnel already on the scene.

According to the Texas Department of Public Safety, the 18-wheeler overturned on top of the 2021 Toyota passenger car, killing the driver and injuring two Centerville volunteer firefighters.

Jocelyn O., 27, of Dallas, the Toyota’s driver, was pronounced dead at the scene by Leon County Justice of the Peace Jack Keeling.

According to the Texas DPS, emergency personnel had their red and blue lights activated at the time.

Thomas Roberts, 55, of Houston, was the driver of the International 18-wheeler and was taken to CHI Madisonville with non-incapacitating injuries.

Meanwhile, Lindsay V., 31, of Dallas, the driver of the 2021 Chevrolet pickup, suffered non-incapacitating injuries and was taken to CHI Madisonville.

The investigation is still open and ongoing.

Texas has the highest rate of traffic fatalities in the country. On Texas highways, a car accident occurs every 71 seconds. Every 2.5 hours, one person is killed in a car accident, and someone is seriously injured every two minutes.

In 2019, there were 19,506 serious injury crashes, with 30,992 people seriously injured, according to the TTD. Furthermore, 3,722 people were killed in automobile accidents.

When three or more vehicles collide on the road, it is called a multi-vehicle collision. A ” chain reaction ” occurs when one vehicle collides with another, a “chain reaction” occurs, causing the second vehicle to collide with the next vehicle.

Victims of fatal car accidents can be of any age. They frequently follow the law and wear seat belts for their safety.

The most common causes of car accidents are driver inattention, cell phone use, texting while driving, speed, fatigue, failure to yield from a stop or private lane, running a red light, and impaired driving.

Many people find it difficult to cope after losing a loved one in a multi-vehicle accident. The victim’s relatives may file a wrongful death claim while the investigation is ongoing.

After an accident, the cost of repairing one’s vehicle can be substantial. You should not be held financially liable if your injury was caused by the negligence of another party. It’s a sad fact that insurance companies frequently undervalue claimants’ losses. You should seek legal advice from an experienced attorney.

An attorney can help you recover lost wages and emotional distress due to the death of a loved one.

Arash Law Texas’s Leon County car accident lawyers have collected millions of dollars in compensation for victims and their families. Please call (888) 398-4017 or fill out our online intake form to schedule your free consultation.