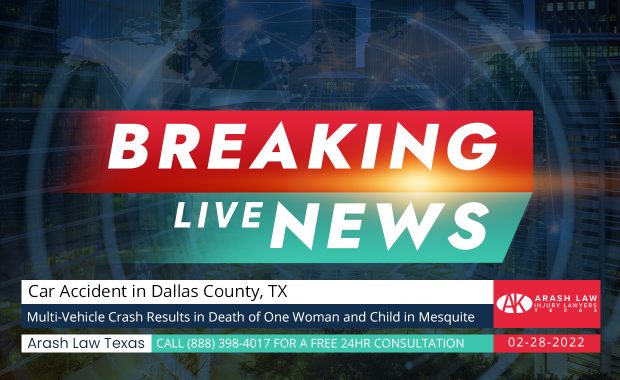 [02-28-2022] Dallas County, TX – Fatal Multi-Vehicle Crash Results in Death of One Woman and Child in Mesquite

According to police, a woman and a young child were killed when a vehicle struck them on Interstate 20 in Mesquite late Sunday, February 28, 2022. The crash occurred around 11:00 p.m. on westbound I-20 near Farm Road 741 in east Mesquite. The woman's vehicle apparently broke down and was hit by an 18-wheeler, according to police. The woman and her young child were unharmed in the initial collision and were able … END_OF_DOCUMENT_TOKEN_TO_BE_REPLACED 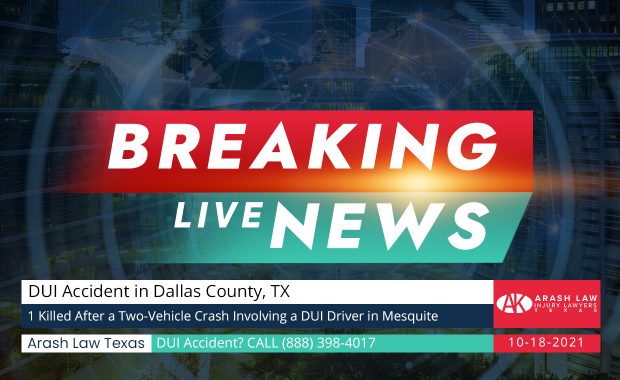 [10-18-2021] Dallas County, TX – One Person Killed After a Two-Vehicle Crash Involving a DUI Driver in Mesquite

A 36-year-old police officer identified as Mitchell R. was killed after a deadly two-vehicle collision involving a suspected intoxicated driver in Mesquite on early Monday morning, October 18. The accident happened in the 21400 block of southbound Interstate 635 in Mesquite at approximately 1:36 a.m. A 2015 Infiniti that Elias L.G. drove crashed into a 2017 Chevrolet Malibu. An off-duty police officer drove the … END_OF_DOCUMENT_TOKEN_TO_BE_REPLACED